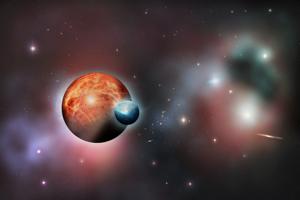 Frequently, you have an exchange of gas or fluid across a semi permeable membrane in respiration and digestion where there is movement from a greater to a lesser concentration, and this is exactly what’s happening when you breathe. As the concentration within the the blood stream and lung sac alveoli become greater than the atmosphere, gasses escape. When the concentration of oxygen is greater in the atmosphere than inside your lungs, the transfer is inward. So that’s how it happens simultaneously. Your lungs relate to the gaseous concentration in the larger atmosphere, much as the earth is part of a larger solar system.

Perhaps it is just a personal quirk – I love to explore the nature of the universe in the way early scientists used a gold leaf electroscope or Leyden jar to probe unseen electricity with the visible manifestations of static electricity. There is a sense of adventure, discovery, wonder and grandeur. Plus, you don’t have to take someone else’s word for things. Remember, much of Einstein’s discovery was done with thought experiments.

So all around us, we have subtle effects underlying observed phenomena and the fascinating part about living today is that quantum physics has rendered existence non material. Despite our sensory evidence to the contrary, there actually is no solid substance. The perplexing philosophy of Yogi Ramacharaka I read as a boy, is now becoming clear, where in the ancient science of Raja Yoga he proclaimed that on closer examination matter is resolved into energy and energy into mind.

Check my other blog posts about understanding the Infinite through meditation, where you are holding thought still and silent to enable direct observation. It’s an awesome faculty resident within us all, but often untapped. Still, we sometime have a hunch or feeling that is unthought, yet proven correct.

I’ve often felt atheists have a far greater faith than what we call people of faith, because atheists believe that order in the universe is the result of survival selection and random chance. It is quite extraordinary really. That the operation of your own breath could arise from absolute chaos and chance. The real miracle is that they’ve lost the sense of wonder.

Isn’t it clear that there’s a fundamental difference between understanding the way of Being, and following a set of guidelines, beliefs and practices codified into an organized religion? Clearly millions if not billions of people follow organized religions, so that’s fine. They may complement or hinder deeper understanding and I’ve always believed that anyone’s instinct, effort or inclination to understand the Infinite is a good thing. I like to think that the kind of God atheists don’t believe in, I don’t believe in either. He would seem to be some kind of unreal caricature. The right question should be What is the nature of being? Not, does it exist? So let’s set aside conflicting belief structures and see if we can get at the actual way things are, also known as Reality. Not subjective or relative, but actual.

The “G” word has almost become unacceptable in public discourse in civil society today. That is why so many modern writers avoid its associated misunderstandings and substitute other descriptors for what Paul Tillich in Alduous Huxley’s The Perennial Philosophy called “the ultimate Ground of all being.” The main idea is that rather than seeking to divide ourselves we need to find ways to unify. Isn’t it true that blood types are universal and interchangeable throughout the world, despite surface distinctions, just beneath the surface we all have far more in common if you catch my meaning?

One of my favorite illustrations of scientific skepticism was revealed in an experiment conducted at Duke University. Participants were seated across from one another at at table attempting to guess the hidden face of a picture card with images such as wavy lines, circles and squares. The fascinating result was, that the results were less than what would have been predicted by random chance, when a skeptic was present. So the inverse was proven. The doubt of the skeptic, that any direct perception was possible without sensory evidence, was a measurable effect countering its own claim.

Another fascinating scientific manifestation of the spiritual structure of the universe is more readily understood when recognizing the ancient axiom that whatever terms we use to describe the universe, the primary truth must be that reality is One. Here’s what happened. It’s quite amazing, and it permanently altered the life course of the man who first observed it. His name is Cleve Backster and he made a name for himself in the 1960s as an expert in the use of the polygraph machine, pioneering its use as a lie detector and testifying as an expert witness in court.

One evening in San Diego California, he was sitting alone in his hotel room with time on his hands and wondered if he could get a reading from the leaf of a plant, by adding water to the soil. Perhaps he was wondering about the effect where giant redwoods raise moisture hundreds of feet with no circulatory system. But nothing happened. So he began to wonder what else he might do, to get a reading on the machine attached to the leaf.

The thought came to him that he might try lighting a match and holding the flame under a leaf. As it happens, he did not have a match, and would have to go into the next room to find one, but the instant he formed the clear intent, and there was no question in his mind that he was going to try this experiment, at that exact instant, the needle on the machine jumped, and was recorded on the moving paper roll.

This effect was replicated around the world in many fascinating variations elaborating the essential principle that plants respond directly to thought and feelings around them, and has been chronicled in print and on film. I initially discovered it in 1971 reading The Secret Life of Plants by Peter Bird and Christopher Tompkins. Other chapters covered Bose, and Burbank, and Carver, though I found Backster’s work most riveting because he was moving the needle on a machine.

Don’t most of us recognize that mind or thought forms the basis of creation? I was watching CNBC’s How I Made My Millions, and the story aired of a woman who got the idea that people needed a better way to store their jewelry which she turned into a prosperous business. Buildings and roads all begin with plans, ideas first.

There is far more to explore in the spiritual structure of the universe. In this introductory narrative, just begin to recognize a unified, intelligence surrounding and sustaining you now.