The feeling of inner peace grows as a conflicted sense of self wanes. So there is a paradox. You need to get your “self” out of the way to admit a larger sense of being, a greater sense of peace and wholeness. 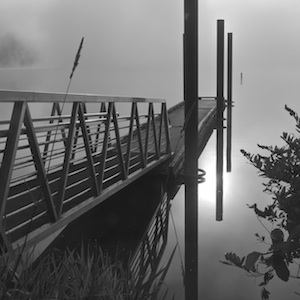 Here are some ways of describing the dichotomy: outer-inner, matter-spirit, seen-unseen, finite-infinite, unreal or temporal-real or eternal. Mary Baker Eddy suggested that Mind cannot be compressed beneath a skull bone.

Our belief in a limited sense of self has been described as illusion, hypnotism, dream. The paradox of transformation is that identity shifts. An expanded “you” emerges only as the “you” that limits awareness fades.

Ever notice how butterflies flutter? They jump around almost as if to say their joy cannot be contained. Could it be they’re just so happy to no longer be a worm?

Scripture describes one Saturday when Jesus in the Temple got up to read a passage from Elijah about setting the captives free and opening the eyes of the blind. Enlightenment is about releasing bonds and discovering a new way of seeing beyond outward appearance.

Here is a personal story about the beauty of holiness and rotten apples. The weather has been very hot recently – around 100 degrees Fahrenheit. I had been doing yard work as sunset approached, cutting up tree branches while wearing leather gloves and a breathing filter tending to make things even warmer. The next task was picking up many apples that had fallen from the tree, were turning brown, rotting and attracting little fruit flies. You pick them up one by one and place them in a plastic bucket for disposal.

I realized my attitude could have been human and bitter. “This job sucks! It’s too hot! I’m uncomfortable, sweating! This is a thankless task! Woe is me,” but having learned to live with a quiet mind, none of these thoughts were present. Instead, I began to notice how tiny almost invisible flies circled the apples and seemed to represent the idea that Life is infinite and even the fallen apple is cared for. The sun was setting and the twilight gave an almost other worldly glow. It was a setting of great tranquility and peace and wholeness as I picked up the little apples one by one. It was a scene of such transcendence, beauty and stillness that I was just transported and transformed into great inner joy and peace just to be in it.